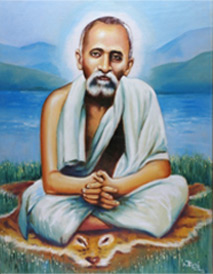 Everyone at some stage in his life, sits up and thinks: Where from he came? Where is he heading for? What is he doing? And what he should do? He also ponders as to how to overcome death and how to get salvation. He longs for God - realisation while still in this body and understands that such God-realisation is the knowledge that destroys death and grants everlasting bliss and that it is the paramount need of any man before the body may drop down any moment. Here he looks for guidance and feels assured that God has not left him in lurch. India, has given to mankind several Saints, Sages, Rishis, Sidda-purushas from time to time.

The aim of life is to make it sublime. It is the Saint who has reached that stage. He has shown us the path, which we have to tread in this world of materialism and uncertainty, to reach the goal of life. Books like Upanishads and Bhagavad-Gita contain the theories on Self-realisation, while the Saints and their life are the laboratories where you find them to actual form and practice. One can read an entire library of books and yet not realise the goal of life but if he gets the contact of a "JIVAN MUKTA (Realised Soul)" and earns HIS BLESSINGS, he would get it in no time. One such Mahan (great saint) is Sri Seshadri Swamigal of Thiruvannamalai.

At Kanchipuram, in the illustrious Kamakoti family, there lived one Sri Kamakoti Sastri. He was an adept in Sri Vidhya Upasana and had mastered in boyhood itself vedas, puranas, smritis, tharkam, vyakarana and mimamsa. Besides these he had another valuable talent- music (gandharva veda). His brother's daughter was Maragatham. She was born beautiful and had learnt epics, dharma, alankara and music from Sri Kamakoti Sastri. She earned the title "Sahitya Sangeetha Kalavathi" when she was 12 years old. She was given in marriage to Sri Varadharaja Joshyar of Kanchipuram who was also a Sri Vidhya Upasaka besides mastering vedas and astrology. To them - Varadharajar and Maragatham- Sri Seshadri Swamigal was born as elder of the two sons. He was born on 22.1.1870 in Hastha Nakshatra (Star) at Kanchipuram.

When he was four years of age he would sing devotional songs and stotras, taught by his mother, in melodious voice and everyone regarded the boy as a Divine-child. An incident at this age of four, gave him the epithet of Hiranya-bahu--one with the golden touch. The occasion was a festival time at Sri Varadaraja Perumal Temple at Little Kanchipuram. Among many, one merchant has brought moulded replicas of Sri Krishna idol. The boy in the lap of his mother noticing it wanted one and at the instance of merchant, the boy picked up one of his choice. On the following day, when the mother and boy were passing through the shop, the merchant came running to them and prostrated before the child and took the two hands of the child and worshipfully pressed them to his eyes, and exclaimed that they are "Golden Hands". He narrated that all the idols were sold away on the previous day when the child picked up one and the normal experience was that only a few will be sold. This was a forerunner to highlight His Grace to devotees, even today.

When he was 5 years of age, he was sent to school in the traditional and orthadox manner. At the age of 7, Upanayanam (sacred thread ceremony) was performed. When he was 14, his father died. By 16 years of age, he completed his education. He had mastered various texts in Sanskrit and Tamil -- the whole Vedanta with three primary texts - Gita, Upanishads and Brahma Sutras, besides Vedas, Nyaya and Vyakarana. He had also mastered music and astrology. When he was 17, his people tried to marry him off, but his paternal uncle Ramaswamy Josyar predicting his horoscope that he will become a Sanyasin (Recluse) and Jivan-mukta (realised soul), dropped the idea.

When his mother was to breath her last, she chanted two slokas keeping her hand on the chest of Seshadri -- one of Sri Adi Sankara -- (Sat Sangatve - in Baja Govindam) which meant that the company of the good led one in time to solitude and thence to emancipation and the other sloka indicated the sacredness of Arunachala -- how merely by thinking of it, one attained ultimate Bliss. Repeating the word "Arunachala" in her tongue, she breathed her last on the lap of Seshadri. He took these two slokas from her mother for guidance in his life. Arunachala stands for Lord Shiva in Agni (fire) form at Thiruvannamalai. He drew a picture of Arunachala by instinct. His personal Gods were Goddess Kamakshi of Kanchipuram and Sri Rama - the divine avatar (God in the form of a person) depicted in Ramayanam (a great literary work of Bharath written by Valmiki Maharishi and adopted by several others in other languages). With the pictures of Arunachala, Rama and Kamakshi his worship was going strong. He had no sleep and no appetite. He will be seen in Chakrath-Azhwar and Kamakshi temples for several hours chanting mantras, slokas, etc. His rigorous and exacting religious practices were viewed with concern by his foster-parents who were taking care of him. He got immersed in Sri Kamakshi's divine form and regarded himself as Goddess Parvathi (Sakthi aspect of Brahmam). He began doing his meditations in Rudrabhoomi (cremation ground) which was resented and questioned by his people. He was wandering in the streets of Kanchipuram, when he met a Gouda Sanyasi, Sri Balaji Paramahamsa, who finding him worthy and fit, took him as his disciple). On the due date, Seshadri's father's annual ceremony was performed by his brother. To give him his father's blessings, he was brought home forcibly and kept locked in a room. At a stage, when the room was opened his relatives noticed that Seshadri had disappeared from the locked room and then only realised his greatness and attainment. He was 19 years of age then. After sometime he was noticed in the temple precincts of Sri Mukteswara at Kaveripakkam, 20 miles away from Kanchipuram.

One day, in the temple, a big serpent came out; Seshadri beckoned it and it came and coiled over his body and held its hood over his head. Those who witnessed were awe-struck. Seshadri now "Seshadri Swami" was unperturbed. His act showed that all creations of Almighty are alike and is all pervasive. When pleaded, he refused to go back home and was heading for Thiruvannamalai - keeping his mother's direction and guidance - and passed through various towns, villages, hills; At the age of 19, in the year 1889 AD, he reached Thiruvannamalai and never left its outskirts, till HE attained Mukti on 4.1.1929 AD. His Holy-body was interred in a Samadhi, witnessed by Sri Ramana Maharishi and several devotees, at Thiruvannamalai - Tamil Nadu (South India) and is worshipped daily.

His 40 years of spiritual life in Thiruvannamalai showed that Swamigal was God himself. Saints Photo Speaking and walking among People, he was Sanchara-Dakshinamurthi (God as man on the move). His biography vividly shows that he was a Jivan-mukta (a realised soul while in body). He did not have body-consciousness and was in ever communion with his Atman (Soul). He saw atman in everything-animate and inanimate. He was seen going round and round a stone pillar and doing pranams (offering his worship) and saying that he was seeing God in it. Similarly he used to worship animals-buffalo, donkeys--seeing God in them. Sometimes he would embrace people on the road including ladies and say that he saw para-sakthi (mother aspect of Brahmam) in them. He did not have any fixed abode. He was always on the move. He will be seen at many places within a few minutes. He will be in rags and dirty clothes. He will enter any shop on the roads and pull out anything from them. The shopkeepers revered him and considered his visit and touch as a great blessing. If anyone gives him a new cloth, he will wear it for a while and give it to someone. Sometimes he will be seen going half-shaven. He appeared without a bath and his hairs matted and hung pell-mell round his neck. There was always a heavenly-smile in his face. Eyes always remained half-closed and turned inward in eternal contemplation. When opened they looked beautiful and slightly orange-tinged like a full moon. If at all he sat, he was in Swastik Asana, with his ankles crossed and the rest of his body poised over and out of contact with the ground. He was often seen at Sri Arunachaleshwara temple – at Kambattu Ilayanar (Murugan) Sannidhi. There was a devotee by name Manikkam, who used to beg in the streets and collect some food and offer it to Swamigal. If Swamigal does not eat, he too would not eat. The stale food would remain for days and Swamigal may some times take it not minding its foul smell. So was his detachment from the body and things of the world. All were alike to him. He was a saint of advanced spirituality. He possessed supernal powers and Godly possession. There was total abdication. Sthitha-pragna state spoken in chapter II of Bhagavad-Gita and Mano-nasam (control of mind) mentioned in various scriptures including Bruhadarinya Upanishad are the "states" the Swamigal attained. He did not get entangled in siddies (Spiritual powers) attained by him. Sri Swamigal was one of the greatest saints of our land and whose holiness has few parallels.

When Sri Ramana Maharishi was in his younger days doing meditation in Pathala Linga cave of Arunachala Temple, it was Sri Seshadri Swamigal who gave him protection from urchins and brought him to the notice of the world that there was a great soul in Sri Ramana. Ramana, younger in age used to be called Chinna-Seshadri (Little Seshadri). Sri Seshadri was called Mother Parvathi and Sri Ramana as Skanda (Lord Subramanya). There were instances when devotees have experienced that Seshadri was Ramana and Ramana was Seshadri. They were contemporaries and each knew the greatness of the other. Sri Ramana's presence, when Sri Seshadri's body was interred and Sri Ramana's personal reading and approval of script of Seshadri's Biography showed Ramana's reverence for this great Mahan. Many were his beneficiaries. Sri Vallimalai Swamigal, Kavyakanta Ganapathi Muni and Bhanu Kavi are to cite a few. Even men of ordinary walk of life had their several ills-mental and physical cured. Several had initiation in mantras according to their eligibility.

Sri Chandrasekarendra Saraswathi, Maha Periyaval of Sri Kanchi Kamakoti Peetam was reported to have said once "will I become like Seshadri Swamigal". Such was the greatness of Sri Seshadri Swamigal.