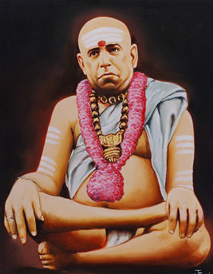 SRI KUZHANDAYANANDA SWAMIGAL was born in the year 1607. It was during the historic period of the reign of Rani Magammal whose capital city was Madurai.

His father’s name was Sri Ramaswamy Iyer, and mother was Sree Tripurasundari. The couple, who were childless for many years, prayed to Goddess Meenakshi for a child. The prayers were heeded, two children were promised but one of them, the one with auspicious marks on hands and feet was to be offered to the temple. The one, named Rajagopalan was duly left in the sanctum of the temple of Meenakshi Amman at Madurai. Thus Rajagopal became Goddess Meenakshi’s son, and went on to become Sadguru Sri Kuzhandayananda Swamigal.

Again when Rajagopal was sixteen years old, Sri Ganapathi Baba came to Madurai, and took the boy to Kasi for further practices and truths. In Benares the boy sadhaka completed his sadhanas and the Guru bade him to return south.

One of the sadhanas was the art of Jeeva Samadhi, being buried alive and self-resurrection in another body thereafter with full awareness of past lives. Another was the art of being seen in different places at the same time with different names and forms if necessary.

In Nepal, in return for a miracle he performed for the then King, he had asked for a Samadhi pit, and been buried in it. The world famous Pasupathinath Temple stands over this holy spot. In Benares, Sri Swamigal went by the name of Trailinga Swamigal (he once gave durshan as 3 lingas to his disciples). He had a Jala-samadhi here and got his body thrown into the Ganges. Even today, there exists a temple of his, at Brahma Ghat in Kasi.

To resume the Sadguru’s journey south, he proceeded to Tenkasi via Bangalore and Thiruvannamalai, performing many miracles on the way. Near Tenkasi, at a certain Sankaran Pillai’s house, he again attained Samadhi.

The latest Samadhi of Sadguru Sri Kuzhandayananda Swamigal was in Madurai in the year 1932. The place is Arasaradi, where the Sangam has built a temple. In this temple, there is a special shrine with a Yantra 18 inches square of Goddess Sri Rajarajeshwari called the Sri Chakra. Poojas are performed daily at the shrines.